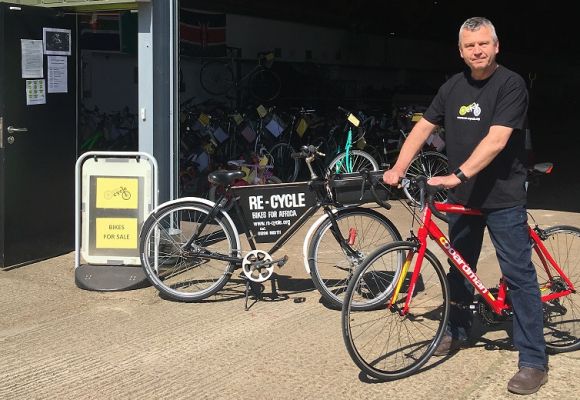 PN: Do you remember your first bike?

VL-M: Yes, for school in the early 1970s in South Africa (where I grew up). I modified my old standard frame Raleigh into a ‘chopper’. Here it is parked up against the wall at home in South Africa (it weighed a ton and did not attract any girls).

PN: Were you a keen cyclist as a youngster, or is it something you’ve taken up later in life?

VL-M: Yes, but mostly in Africa. I’ve been primarily a commuter, using my bike to achieve multiple objectives, like eco-friendly transport to school and work, a great exercise fit for work-life balance and also just time to relax and think as I pedal along.

PN: What kind of cycling do you do – leisure, commute, sport or a combination of these?

PN: Do you like cycling alone, or with family and friends?

VL-M: I would say mostly alone for getting to work and everyday life, e.g. shopping.

VL-M: For me it’s car drivers, ‘controlling’ 1 to 2 tonnes of steel and plastic ‘missile’, coming up from behind, and wondering if they are on their phone or sending a text message? I lived for many years in Malawi in Southern Africa. On my way to work one day, I was nearly killed by a lady driving her automatic recklessly, whilst diligently communing on her mobile phone (resplendent with a boot sticker stating ‘Covered by the blood of Jesus’). Catching her at the traffic lights, she had that look of guilty surprise as I politely told her to cross out ‘Jesus’ and replace it with ‘Cyclists’!

PN: And what’s the best?

VL-M: The bike is without doubt human kind’s finest invention!! Modern bikes are a magic carpet ride, compared to the days of yore, when life was really hard. So as Norman Tebbit once said, ‘get on yer bike’.