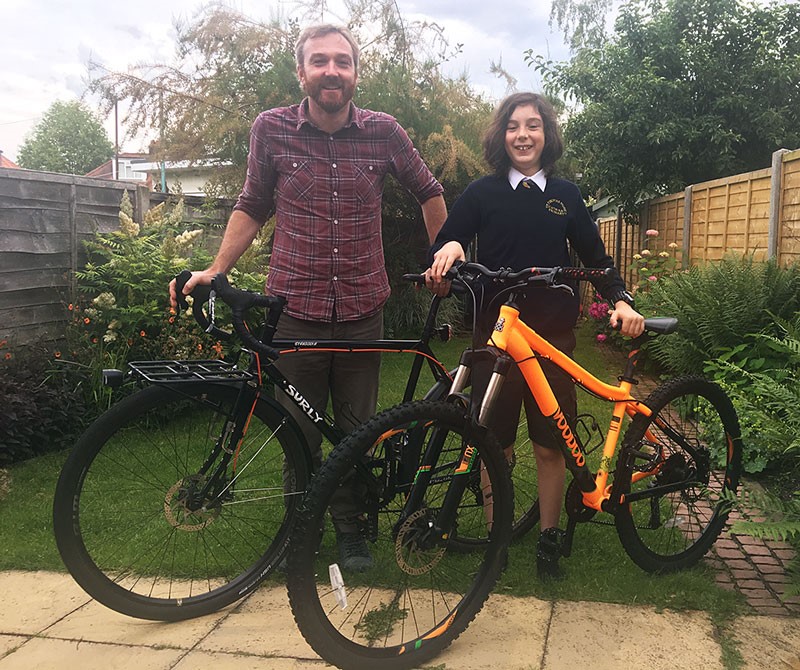 This month we had a chat with Phin and Gabi Wenlock, father and son who have both been riding their whole lives and see it as a normal and sensible way of getting about. They invited me round for a cuppa, and I just about made it inside before the heavens opened! With the rain hammering down outside we talked balance bikes, writing off your first bike, critical mass and why we need to rethink our approach to how and why we use our cars…

Gabi: I was 3 when I first learned to ride a pedal bike, before that my dad had taken the pedals off my bike and I was using it as a balance bike since I was 2. That meant that when I was ready to put the pedals back on I had no problem!

[Phin showed me a video of Gabi’s first ride – he’s not kidding!]

Phin: I was self-taught, my parents had tried and failed with the old method of stabilisers so when my dad took them off I fell over straight away. I ended up getting a couple of old crates and pushing myself off until I got the knack. I’ve always had bikes my whole life, and started hanging out at a bike shop in Maldon when I was a kid – getting in the way. From that I joined the local cycling club and dabbled a little bit in local time trials, but nothing serious. I’ve always cycled for utility and for leisure though.

G: I did some grass track racing with Colchester Rovers when I was younger, I don’t think I ever won, but I really enjoyed it!

G: My first bike was a blue Ridgeback MX14 with 14” wheels, then I had a red Specialized, an Orbea, and now the Voodoo mountain bike I have. I’ve had a lot of bikes!

P: The first one I remember was a Dawes Ascent mountain bike with a 21” frame, there was no suspension in those days, it was way too big for me… so it went well until I crashed it at Danbury Common and that was the end of that.

G: Mostly mountain biking, but I cycle for transport and for fun, just to get around. I ride to leisure world and to visit friends.

P: Quite a lot. I cycle to work every day, do club rides at the weekend and use my bike to get about. We recently went to Gabi’s first critical mass in Colchester, I used to go to them a lot in London.

G: It was great! We need more people and music next time, and more horns and bells. I’m going to fill my handlebars with bells!

P: It’s ok, but there’s lots of improvements needed still. Gabi is starting secondary school soon and we were trying to find a safe way to cycle to St Benedicts from East Hill but it’s pretty much impossible. You have to ride against the flow of traffic, and the paths aren’t quite joined up.

G: It’s decent, apart from the occasional idiot. People in cars don’t always look for cyclists and pedestrians at junctions, especially at the bottom of East Hill and Brook Street where there’s too many traffic lights.

P: Until we acknowledge the problem is that there’s too many cars, we’ll never solve the problem. You can’t keep increasing “traffic flow” forever – we have to change our behaviour and stop driving alone. When you look, most cars are single-occupancy and it just doesn’t make sense. Cars have a place, but it’s not for carrying one person around. Bikes on the other hand – they’re (mostly) designed for one, don’t take up much room, and they can take you just about anywhere!

P:  It gives you a sense of freedom, and you can access things and places you’d never be able to in a car. It doesn’t have to cost you a lot, and you can even fix your bike yourself (*ahem* cheeky plug for Colchester Bike Kitchen, you’ll often find Phin manning the spanners)
—
On that note, I took advantage of a break in the rain to make a dash for home. Thank you to Phin and Gabi for taking the time to sit down for a chat, and look out for them on a Critical Mass ride near you!