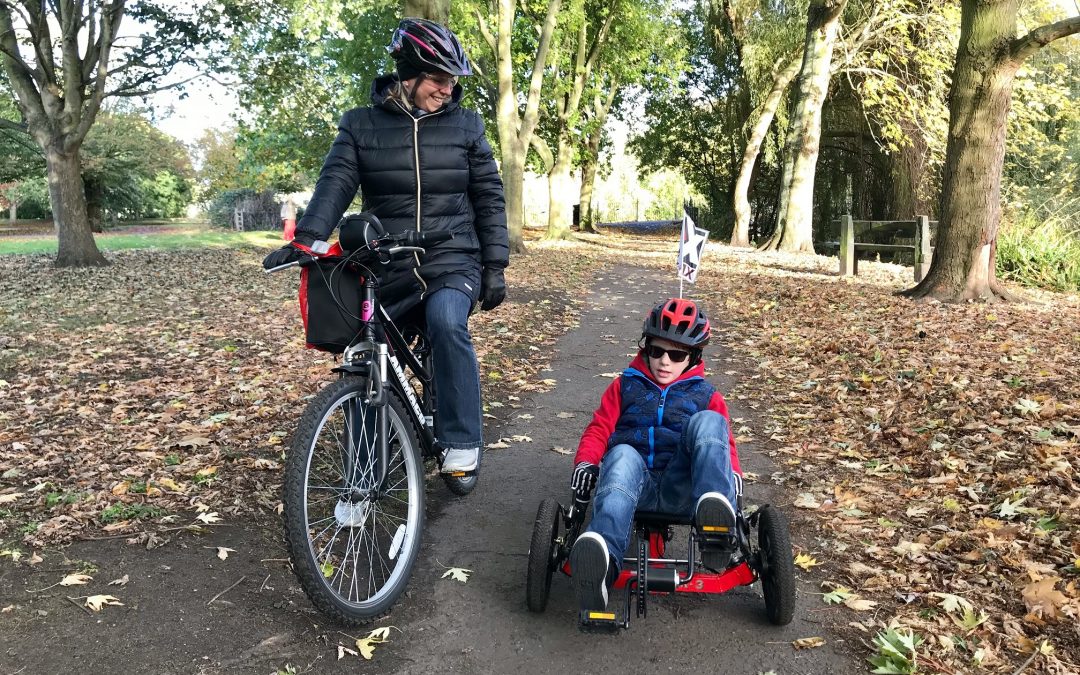 We first met Irena Banham with her husband and son at a Cycle Colchester event, and apparently the Cycle Colchester map and a chat about family cycling got them thinking. This month, Irena tells us how Zak has encouraged both of his parents to become a bit obsessed with cycling, and how it’s now proving a great way for her to beat congestion on the school run.

IB: Zak is nine years old and has an agenesis corpus callosum (the left and right hemisphere of the brain aren’t connected) and an undeveloped cerebellum which affects his balance. We were told he’d never walk, but after a few years of intense physiotherapy he has proved everyone wrong. He learned to crawl and walk and next he needed to improve his balance. We got him a scooter with two wheels at the front and one at the back but he found it difficult trying to push himself along. I attached a belt to it so I could pull him along, and sometimes he liked it, but sometimes he didn’t. I’d also been training him to walk on a plank in the garden, and all of a sudden he became more confident using it, and then the scooter became easier. My husband and I got scooters too, so we could all scoot around Castle Park, stopping at the play areas at Kings Meadow and East Hill, as well as the outdoor gym near Leisure World. After a while we wanted to start going further afield and having more fun, so we tried getting him a trike when he was about three or four; he sat in it and we pushed, which wasn’t really a great success.

PN: But now he rides a bike, doesn’t he?

IB: Yes, we got him his first proper bike when he was five, and he got on it once, but couldn’t balance and wouldn’t try it again. (If anyone is interested, we have a lovely bike, never used, that is for sale!) Next we looked at conventional trikes but they were rather big and unattractive, so I looked online and discovered TrailNet in Thorndon Forest near Brentwood who have a whole range of different bikes you can try. It was late October 2017 and they were getting ready to close for the season, so we were just in time, and spent the day trying every bike that might be suitable before we settled on a K-3 KMX Kart, a cool fusion of go-kart, BMX and mountain bike with a remarkable stability due to its low centre of gravity. As soon as Zak sat on the Kart he just wouldn’t get off. Everyone stopped to look, but in a good way, with an expression that said “Wow, look at that!” It was so different from the glances you usually get if you have a disabled child. We gave it to Zak as a Christmas present and as I didn’t have a bike I went on my scooter. We rode a lot together over Christmas, and then again in February, after the snow had gone. I got my bike in March, my first one since I was in my 20s, when I cycled at Uni. Zak has got us really interested in cycling, and since we got back from our holiday in May we’ve been out every weekend on our bikes. My husband works in Sheffield from Monday to Friday, so family time at the weekend is very important to us. Zak and I have dinner soon after we get home from school, so we’re free from around 4.30pm to spend a couple of hours cycling and finding things to do. Locally our favourite ride is the Wivenhoe Trail. If we’re late setting off, we’ll sometimes stop for lunch at Bambu, a lovely Vietnamese restaurant opposite the light ship at Colne Causeway. And when we get to Wivenhoe we can stop for a drink at the quay. We also enjoy riding to High Woods Country Park, using the Mason Road tunnel under the railway, and we can spend time at the BIG Garden and at the play area, as both of them are near the Visitor Centre. Other places we sometimes visit are Thetford Forest, and Alton Water where my tip is to go clockwise if you want to avoid a steep hill!

PN: What made you decide to cycle to school instead of going by car?

IB: I used to go to the gym every morning after driving Zak to school, but when the roadworks started at the Ipswich Road roundabout at the beginning of October, it was crazy, it took us so long to get there. So we’ve started cycling to school instead, and we leave Zak’s bike with a friend who lives nearby, as the entrance to the school is just too crowded – and all the kids want to have a go on his bike! And instead of going to the gym, I now enjoy riding into town for appointments or to meet friends. I must admit I found I was losing interest half way up North Hill, but I’ve found an easier route up Maidenburgh Street and cycling is really saving me so much time. The road diversion was taking me 45 minutes whereas now it’s just 10 minutes by bike. I’m gradually finding more and more short cuts or more pleasant routes away from the roads.

PN: What are the best and worst things about cycling in Colchester?

IB: I hate all the traffic fumes! Cycling through Castle Park is so much cleaner, the colours are beatiful at this time of year, and we can stop to feed the ducks, or chat to people walking their dogs.