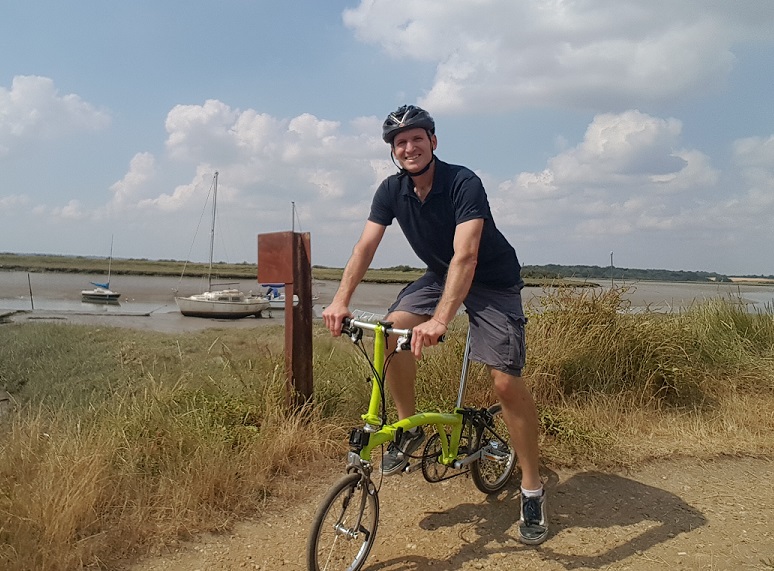 PN: Tell me a bit about how you started cycling.

DG: I’ve been a cyclist ever since I can remember. I think I started with a bike with stabilisers; but of course now there are balance bikes which are a much better way to start. My first new bike was a Raleigh Maverick, which I was given for my twelfth birthday, it was an early (and affordable) kind of mountain bike and I cycled everywhere on it with my friends, around the back roads in Norfolk where I grew up. We’d be out all day, riding the bikes and climbing trees, and we had lots of pile ups and grazed knees.

As I got older, I liked to explore further afield, and when I was fifteen I did a cycle tour of Norfolk with my tent for several days. I lived near Kings Lynn and we had family in Norwich, so I planned a route that took on a big loop around the coast and via Norwich. I carried on cycling when I was a student, I loved being out on my bike in the open space and fresh air, and it was always a good escape from the pressures of my degree. I also spent a few weeks touring the French Alps with a friend of mine one summer, touring between ski resorts and tackling some pretty exciting downhill sections on mountain bikes.

PN: Did you keep up the cycling when you started work?

DG: Not so much, as I had longer commutes and needed to drive. Although I had a Brompton when I was working at Essex County Council it was stolen from behind my desk! In my last job, as Director of the West London Alliance, I started taking the train to Liverpool Street and then the tube to Ealing Broadway. After a couple of months, I decided that this way of commuting was really unpleasant, so I got another Brompton, and rode across London between Liverpool Street and Paddington. Cycling is a great way to discover a city, and that time on the bike between stations with lots of like-minded cyclists helped to keep me sane! I worked with nine boroughs in north west London, and although I’m not an obsessive cyclist, I found it really was the quickest way to get around. I regularly used to go to Brent Council in Wembley from Ealing Broadway, and it took about 20 minutes on the bike, compared to 50 minutes on the bus, and up to an hour in the car.

PN: What about competitive cycling, is that an interest?

DG: In recent years I’ve done a few sportives with my eldest brother, but although they’re timed, they’re not races. On 28th July I competed in the Brompton World Championships in London as part of Prudential Ride London (photo above!). It involved eight laps of St James’ Park with a ‘Le Mans’ style start on the Mall and lycra was banned (which was probably for the best!) I also raised some money for charity.

PN: What do you think of the cycle routes in Colchester?

DG: I’m fortunate where I live, near the Hythe, as it’s an easy ride to the office at Rowan House. And my family all cycle, it’s a nice thing to do as a family, and we enjoy riding along the river to Wivenhoe and further afield. I think it was a good move to open up Castle Park to cyclists, and although there were fears that there might be conflict with pedestrians, this doesn’t seem to have been the case. There are still a few connections that need improving though, like the route leaving the south side of Colchester station onto North Station Road. But on the whole, it feels like we’re a town trying to do what we can for cyclists.

DG: It has to be inconsiderate drivers. It doesn’t matter how much care you take, some of them just seem to be annoyed that you are on the road. And there are those that suddenly turn left in front of you, without seeming to notice you’re there.

PN: And what’s the best thing?

DG: It’s the freedom, the ease of keeping fit, and it’s just a great way to get around. Every time I get on a bike I’m reminded what an incredible invention it is!