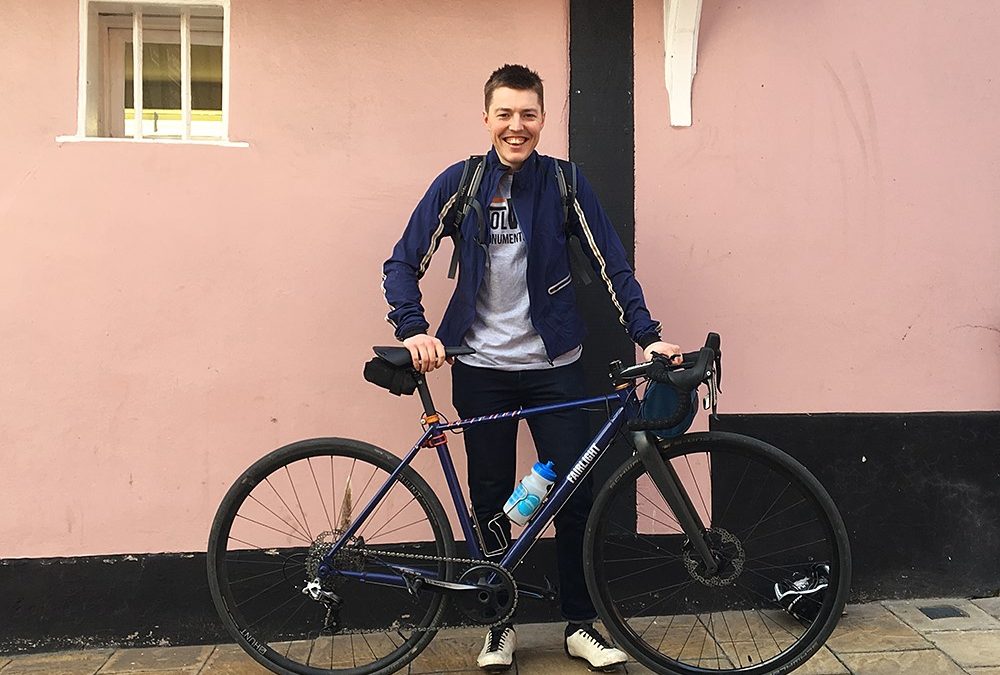 This month I’m joined by Alex McNulty, a personal trainer and relative newcomer to cycling. He tells me how he’s been making up for lost time, and why he chose to sell his car and rely on his bike instead. We met up at Café Saison in Trinity Street for a quiet cuppa and a chat.

Tell me a bit about how you first started cycling

I rode a bit as a kid, the same as everyone else, and cycled for commuting when I was at university at Essex as it was the cheapest way to get around. I didn’t get into it properly until the summer of 2012 when I watched the Olympics and Bradley Wiggins winning the Tour de France. I got chatting to my uncle who was commuting in London at the time, and he was telling me how great cycle commuting is and how liberating it feels. I went straight out and got myself a bike!

What was your first bike?

I bought my first bike off eBay at the end of the summer of 2012. It was a Ribble road bike and was too big for me, but I bought it anyway because it looked cool! Soon after I sold that and bought a new bike from 53-12 in Colchester that I used for years. I was living in Weeley at the time so it was a 30 mile round trip commute to my job in Highwoods. That seemed like a really long way at the time, and probably still does to some people, but I found myself driving less and less as cycling was more satisfying. It wasn’t long until I was riding to work just about every day, although my timing wasn’t great with the weather so I quickly learned the benefits of a clean bike and a pair of mudguards!

What made you decide to get rid of your car?

In 2014 I moved to Colchester and bought a flat in Lexden. I carried on cycling to work, using my car even less than before as it just didn’t make sense to drive. Most of the time it was faster to cycle to work than to sit in traffic across town, or drive a long way out of my way just to avoid it. Over time I found myself using my car less and less, until I realised I didn’t really need it enough to justify the cost. I’m lucky enough to be able to borrow a car on the rare occasions I need one, but most of the time I find it easier and more enjoyable to cycle. I don’t get stressed in traffic, and most of the trips around Colchester are so short that it’s quicker to cycle anyway once you’ve faffed around looking for parking. I actually parked my bike right outside the café today!

I do a bit of everything really. I still commute to work every day, and use my bike to cycle into town for errands and to see friends. I’ve done a couple of cyclocross races and I do a bit off off-road gravel riding and bikepacking, but I am mostly into road riding. Over time I’ve built up my distances, starting with commuting, on to bigger challenges like the Fred Whitton, London to Paris, and various sportives. I ride with local club ColVelo and their 200-300km “monument” ride series over the summer. I have more recently got into Audaxing, as they are as challenging as you want them to be, but still with a good social side. They can be anywhere from 50 miles to 350 miles but they are all about pacing and timing, not racing. I’ve actually signed up for Paris-Brest-Paris this August (a 1200km Audax) so I’m spending just about every weekend between now and then riding 200-300km in preparation!

Recently I have also started getting interested in bikepacking. It’s a lighter weight version of cycle-touring, and lets you get off the beaten path a bit and explore the wilderness. I love the fact it’s self-sufficient, and you can get right out into the wild without disturbing the peace and quiet. You can camp is amazing places, and just stop for a brew up somewhere remote and beautiful!

Colchester is OK on the whole, it has lots of good bits of cycle infrastructure but it’s not all linked up which can be frustrating and quite challenging for less confident riders. I can sympathise with people who don’t feel safe enough to ride on road and so end up on the pavement, even if they’re not meant to be there.

I am confident enough to ride on the roads, but a lot of the time I avoid them completely and try to ride through the green spaces we’re lucky enough to have in Colchester like Highwoods Country Park, Hilly Fields and Castle Park. It’s more relaxing and enjoyable to get away from busy roads, and it’s fun to explore the back routes, especially as I ditched my car to avoid the traffic! I can actually get to work mostly via off road routes, and I find I am less stressed as a result.

Despite there being room for improvement I’d still rather be riding my bike than driving!

It saves me money (even if I’m always buying things for my bike!), It’s easier to keep fit than running, and it’s a great way to see more of the country. I love the social element too. When I’m riding with other people we can have a chat while cycling along, or over a coffee and a slice of cake at a café stop. I’ve made friends from all walks of life through cycling.

I really enjoy how satisfying it is to get from A to B under my own steam, be it just riding to work or a longer distance Audax.

At the end of the day I just love riding my bike.

I always remember something Eddy Merckx (won just about every bike race in the 1970s) said:

“Ride as much or as little, or as long or as short as you feel. But ride.”

That feels like the perfect note to end on. Thanks for joining me for a chat Alex, and happy riding!